Welcome to my website!
I am a teacher, performer and early years specialist, organising innovative and inspiring musical events across the North West of England.

As well as teaching the violin and viola, I run four string orchestras catering for all ages and abilities. These ensembles have performed across Europe, from Tuscanny to Budapest, and perform regularly in concerts in the in the Southport area. Alongside this, I am an active classroom teacher, winning the Classic FM Primary School Music Teacher of the Year award in 2010. I have taken groups of primary school children to play at the National Festival of Music for Youth concert in Birmingham and Southport Music Festival, motivating pupils with the excitement of performing music.

Following on from my appointment as Director of Strings with Sefton Music Hub and my continuing work with Southport Strings I am now incorporating folk music from all over the world into my teaching. Recently our focus has been on music from Scandanavia, in particular from Finland as Southport Strings have made friends in Helsinki and enjoys frequent exchanges of tunes and visits. I also use many tunes from the British Isles also gathered visiting various Folk Festivals with our group of young people.

In the past few years I have become increasingly involved in music in the community, running an NHS-funded drumming circle in Southport and undertaking a series of rewarding workshops for severely autistic children at The Elms in Stockbridge. I have considerable experience organising original, one-off school projects, often in collaboration with Kaleidoscope Arts. These draw on all of the different art forms, music, dance, poetry and visual arts. Past topics have included the Seasons, the Elements, The Silk Route and many more - and culminate in a performance involving large numbers of students.
When I get the chance, I enjoy performing with my folk and jazz trio Gallimaufry. We have performed in all manner of venues across the North West - from St George's Hall and the Tate Modern to schools, pubs and prisons - in a variety of styles and for a variety of occassion. We specialise in ceildhs and performance but have also put on projects in schools.
For many years I ran Music Playtime classes for pre-school children. Focusing on developing a strong rhythmic base and engaging kids and their parents, Music Playtime worked because it was fun and full of ideas. Although I don't currently run any classes, I have written two books with accompanying CDs to help other teachers looking for early years material and to give parents something new to listen to in the car!
Growing up in a creative household, I studied viola at the Guildhall School of Music and Drama then joined the Iceland Symphony Orchestra for 2 years. Moving back to the Uk I free-lanced with the Bournemouth, Halle, BBC Philharmonic, Royal Ballet & Royal Philharmonic Orchestras before joining the Royal Liverpool Philharmonic Orchestra full-time. After many years of playing I trained as a Suzuki violin teacher. I have an LTCL in Music Education from Trinity College of Music, focusing on composition in the classroom. I studied Dalcroze(movement) and Kodaly (singing) and keyboard imorovisation at the RNCM and am a Singing Leader for Sing Up. I have collaborated on many education projects with the RLPO over the years, most recently with their Tuning In to Children early years initiative. 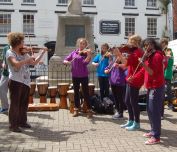 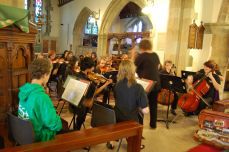